INVESTMENT PROJECT ON THE PREPARATION STAGE

The winning tender for the design of the traffic garden and skatepark in the Silesia Park was announced. The cost of documentation preparation will be PLN 145 thousand. The new facility will be built on the site of the old one in the Scout Centre. The project will be implemented by the Krakow-based company Meritum Projekt.

According to the concept, the facility will be divided into four areas: the area for the youngest visitors using running bikes and four-wheeled bikes, the street games area, the skatepark and the traffic school.

The traffic school will have plenty of infrastructure and obstacles simulating the conditions on an actual street, including a roundabout, speed humps, an intersection with traffic lights, a model railroad crossing with gates, a road tunnel with lighting, as well as a model petrol station and a bus stop with a shelter.

Furthermore, the skatepark, which is currently located at the “Fala” Swimming Complex, will be moved to a new location with the potential of adding more ramps and railings.

The facility will also have a climbing wall, a bike obstacle course, a manoeuvre practice lot where bicycle driving license exams can be taken, and even a bike repair shop. The Bike Park will have plenty of lighting, and there will be comfortable benches for parents and grandparents visiting with their kids to sit on.

The contractor’s task will be to prepare two concept proposals, the building plan and the detailed plans, and to obtain the building permit. If everything goes to plan, kids will be able to enjoy the Bike Town in 2022.

“The traffic garden will be a great addition to the Silesia Park, with something for everyone. The little ones will take their first steps on running bikes, while older can learn the basic traffic regulations. The Park hasn’t forgotten about the avenues and paths for cyclists, either. We have already modernised Scouts’ Avenue which now has separate bike lanes. The upgrading works are continuing on the bike paths at the Dancing Circles, the Maple Avenue and the paths around the Rose Avenue,” says Agnieszka Bożek, President of the Silesia Park. 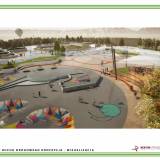 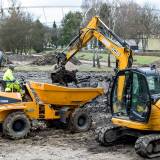